Am I the only one who compares myself to others?

Hmm...that was a comparison, wasn't it.

I've been self-conscious for as long as I can remember, worrying about what other people think. But I didn't realize how much it affected me as a parent until our son entered the Goldfish class at his swim school.

I mean, sure, parents are always comparing their kid to other kids, right? It's not always a bad thing; my son was born three months after my sister's son, so we were constantly comparing notes about our boys' development and issues we encountered. This type of comparison can be a helpful way to identify (and learn how to deal with) problems.

But often comparison is less about helping our kids than it is a way to make ourselves feel better about our parenting. Am I right?

After all, parenting is a really scary thing. The nurse hands you this screaming, squirming, breakable little being, and somehow you're supposed to not only keep him or her alive but also magically know how to nurture this unique person into a responsible contributing member of society? That's scary!

It's a hard job, and we constantly wonder whether we're doing the right thing, and question our decisions, so when we see someone else's kid acting up or doing something our kid would never do (ahem, really?) is it any wonder that we give ourselves a little pat on the back? "At least I'm a better parent than THAT person," we secretly think.

Or maybe it's just me.

Such comparisons might seem like a harmless little ego boost at the time. But I've learned that they always come back to bite you. 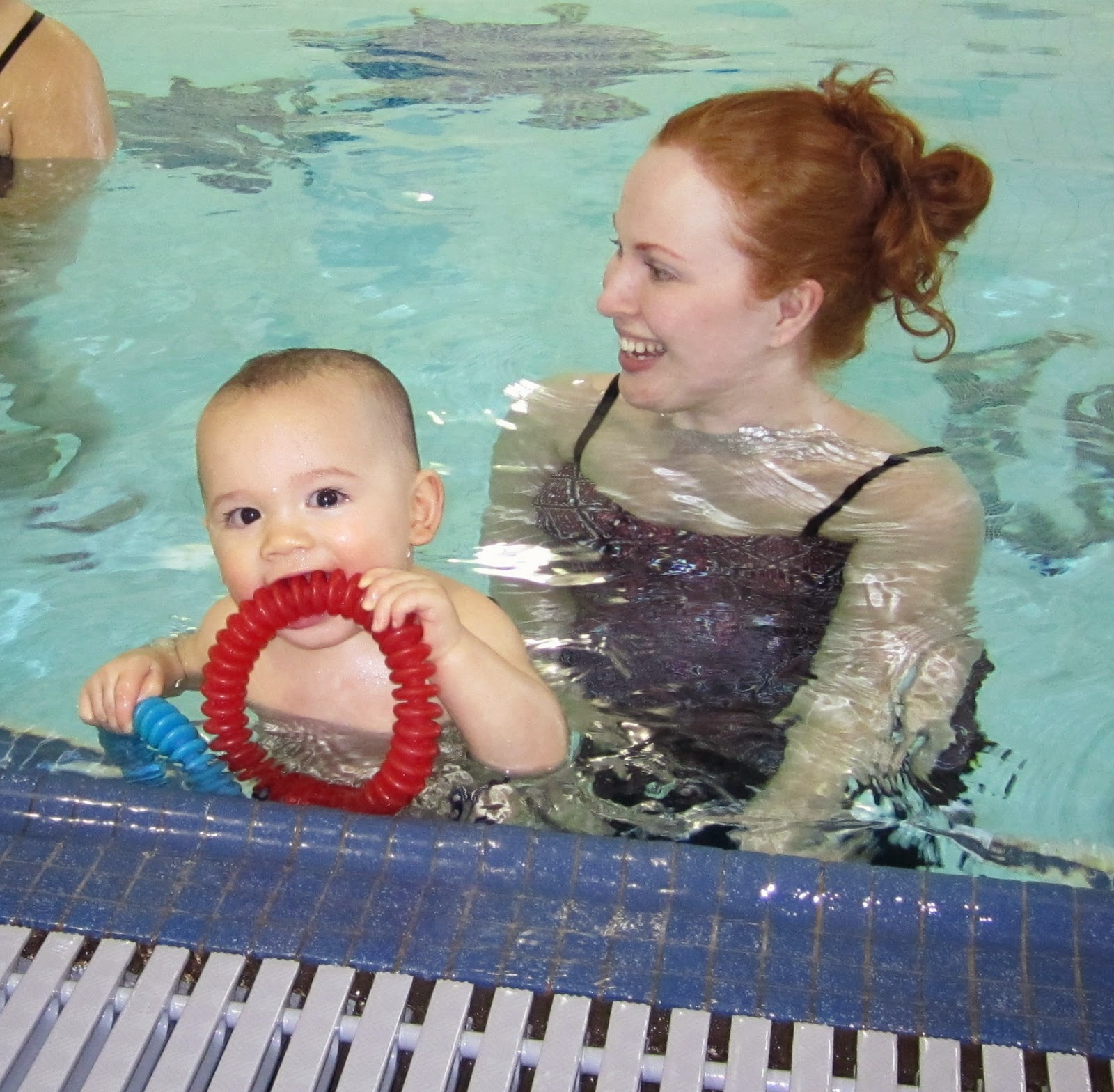 For example, my son started swim lessons at the tender age of three months, and really excelled at first. I confess I had brief dreams of him competing in the Olympics someday. (Don't we all do that with our kids? Or am I the only one? Wait--comparing. Sorry!) And, yes, comparing his swimming with that of the other kids made me feel better about myself.

So imagine how it felt when the tables were turned on me and suddenly my kid was the one screaming instead of swimming.

We had taken a two month break from lessons when our second son was born, and when we came back, our firstborn had developed a fear of the pool that took a long time to work through. By the time he was back to his pre-sibling skill level, his peers had moved on to other classes.

Then he turned three and moved into Goldfish, his first class without mommy in the water with him. His teacher had assured me that this usually helped kids progress, but not my kid, apparently. While his classmates mastered skills and moved up to Jellyfish, he continued to struggle with basics.

I was so frustrated.

My husband asked if my frustration had more to do with what other people thought (or what I thought they thought) of me and my parenting than it did with our son's lack of swimming ability. (He knows me so well.)

That's when I realized...comparing kids goes both ways. Sometimes you come out looking good. Sometimes you don't. But either way, judging the quality of our parenting based on comparisons with others is a losing proposition.

Each kid, each family, is different, with a set of problems and priorities and privileges not quite like any other. Often these variables are invisible to outsiders, making it impossible to accurately assess what we see in public. It's like comparing apples and oranges. What's the point? Any good or bad feelings you get out of the exercise are likely unwarranted.

Rather than being frustrated with my kid for not being like his peers, I needed to deal with him as an individual, and figure out what I could do to help him get over this bump.

So, I talked to his teacher. She suggested practicing at home. Duh. It was something I knew we should be doing, but hadn't made a priority. Now that changed! If we weren't able to swim during the day, our son did dry runs on his bed before going to sleep. He improved a little, but his fears persisted, distracting him during class.

I realized he needed a little extra motivation to keep his mind off his fears.

We bought him a toy that he really wanted, and told him he would get it when he earned his ribbon for completing the skill he was struggling with. Before class, I reminded him of the promised reward. "When you're trying to do your backfloat, and you want to roll over instead, think about that garbage truck toy! Remember that you want it more than you want to roll over!" 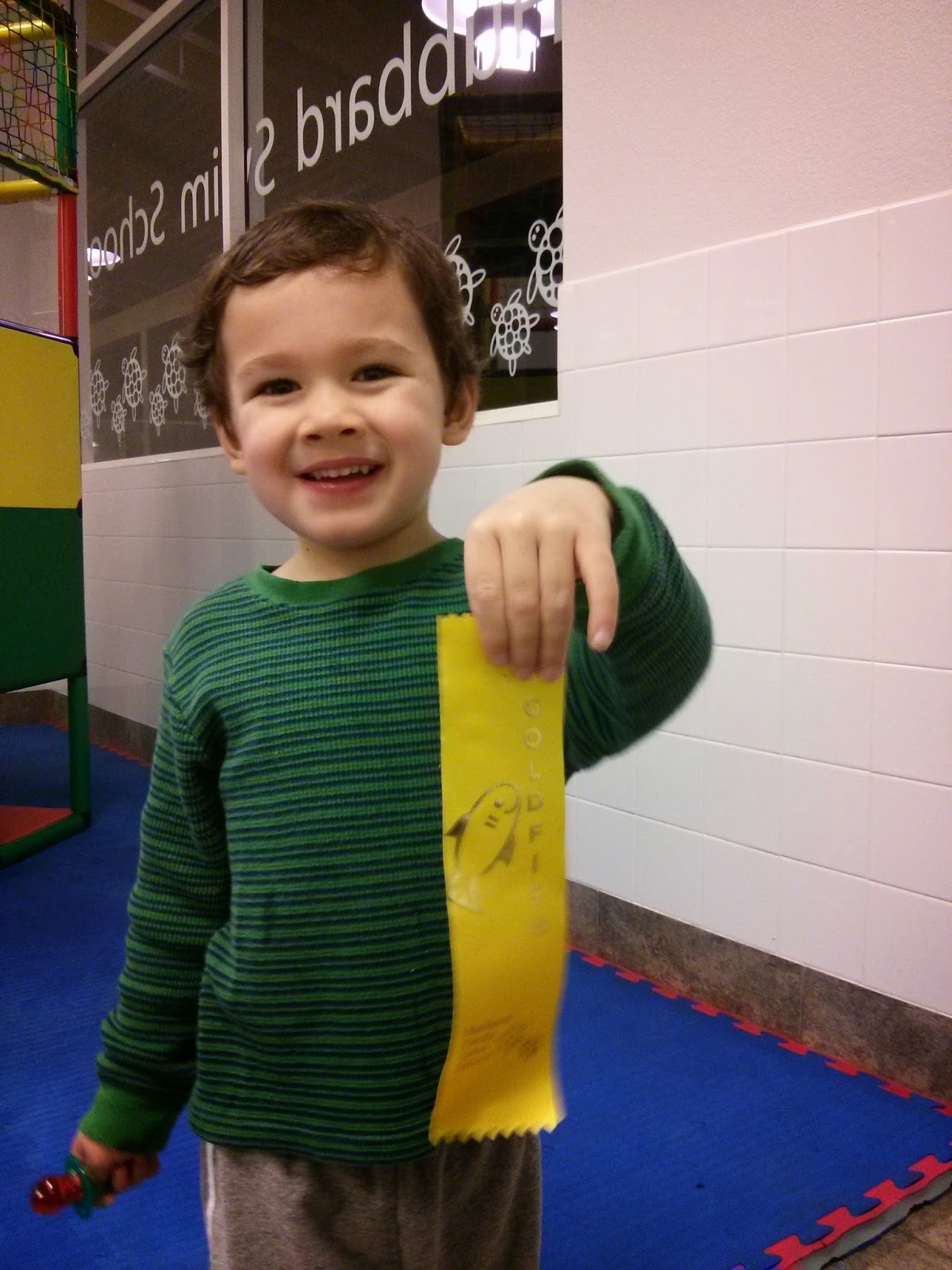 He ran up to me after class clutching his ribbon saying, "Mommy, I kept thinking about the garbage truck, and it worked!"

Now, I'm not advocating constant bribery of our children, but sometimes having something to look forward to can help cut through fear and panic.

After all, this is how God "parents" us parents. We are each unique individuals, and, just as the master did in the parable of the talents, he has given us each a unique set of responsibilities (a.k.a. children). Our job is to do the best we can with what he has given us, knowing that when he sees the return we have made on his investment, he will say, "Well done, good and faithful servant. You were faithful over a little; I will set you over much; enter into the joy of your master." (Matthew 25:21)

The truly great thing (which is sometimes the only thing giving me the courage to get out of bed in the morning) is that he doesn't leave us to do the job alone. One of my all-time favorite Bible passages is Matthew 11:28-30, where Jesus says, "Come to me, all who labor and are heavy laden, and I will give you rest. Take my yoke upon you, and learn from me, for I am gentle and lowly in heart, and you will find rest for your souls. For my yoke is easy, and my burden is light."

Yes, parenting is hard and scary, but I have the best help I could possibly ask for. I don't need to compare myself or my kids to others to see how I'm doing or get an ego boost. I'm accountable to just one person, and the reward he promises is way better than any short-lived warm fuzzies gained at someone else's expense!

Back to swimming lessons: a few weeks ago our son FINALLY mastered all the skills in the Goldfish level. As his achievement was announced to the school, no one was cheering louder than me! It had been a tough class--for both of us. We'd both had some hard lessons to learn.

And now...on to Jellyfish!

I wonder what we'll be learning now?