Before you Disney lovers go all hater on me, let me clarify that I love Disneyland. I've been there several times and enjoy it even more as an adult than I did as a kid. But in this season of my life (mom with two little boys, ages 1.5 and 4), I love Legoland more. And here's why:

1. Legoland is Cheaper than Disneyland

I'm not saying Legoland is cheap. It's not. One day tickets are pretty pricey. But unlike Disneyland they run a lot of specials and you can buy discounted tickets at a lot of places. Last year we got our tickets through our local AAA office (so we got a discount on top of the current Legoland deal which was 5 day tickets for the price of 1!). Right now our Costco is selling three month passes for $84! Upgrading to memberships cost less than the price of another ticket. All this adds up to a lot of saving over Disneyland.

For example, two summers ago we went on our first family vacation, to Disneyland. We brought our two-year-old and our two-month-old, and our in-laws, and spent three days at the park. We had a blast, and I would like to go back again someday. 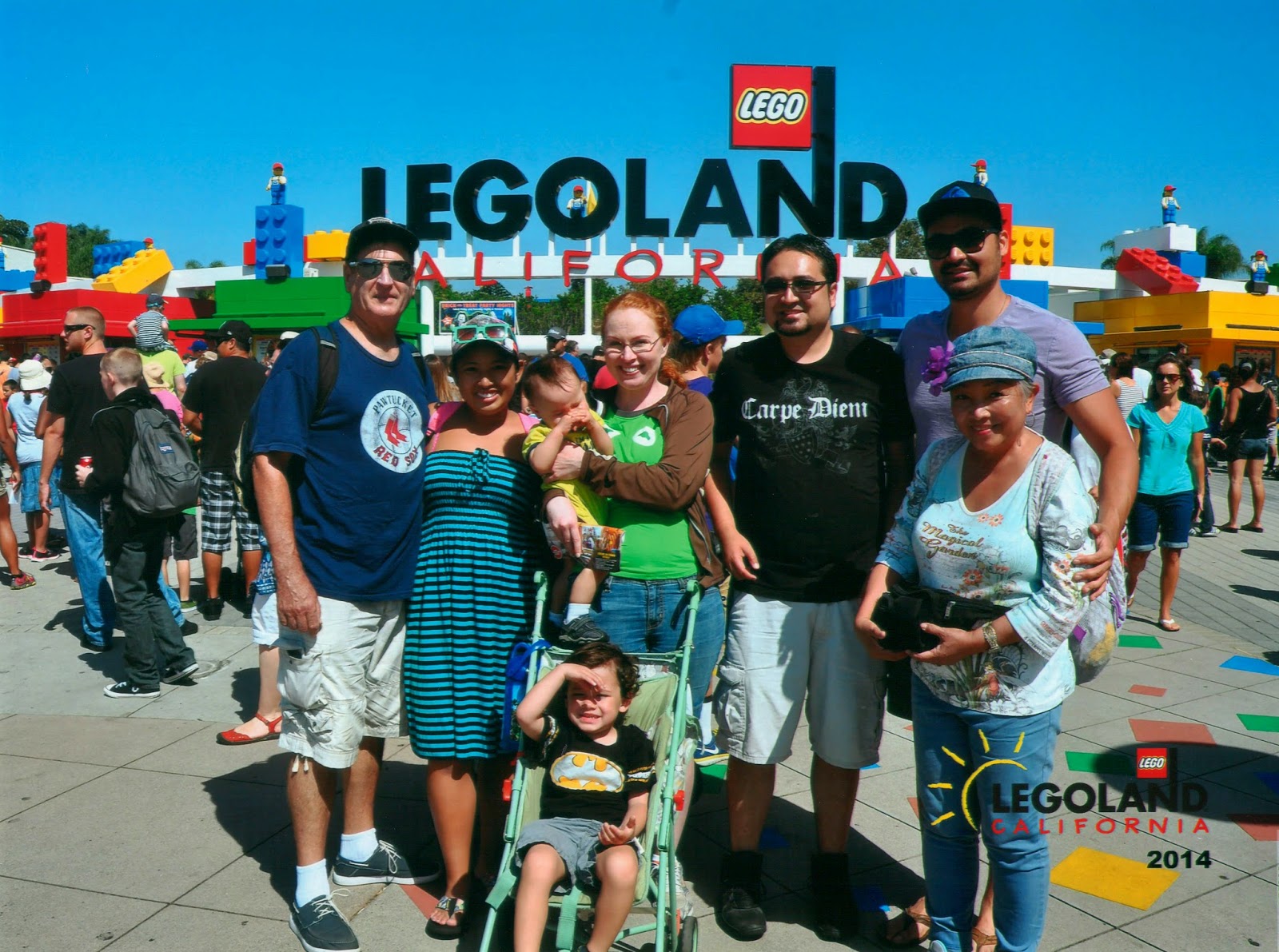 But last summer we took our family to Legoland instead. This time we brought along two more family members, and went to the park for five days instead of three. Oh, and we had to rent a minvan to haul everyone around.

So, admission tickets for two more people, three times the hotel expenses, and a week-long van rental...and our trip to Legoland was STILL cheaper than our trip to Disneyland!

Legoland is cheaper. Hands down. This allows me to enjoy my time at the park more, rather than stressing about "getting my money's worth" out of every minute. While at Disneyland, I couldn't help but calculate the ticket cost per hour, and weigh my enjoyment of each hour against the cost...yeah, I'm a little nuts like that.

By the way, when we first went to Legoland, I was skeptical that we would even want to go to the park for five days. We got a hotel within walking distance of the beach (Surf Motel, I highly recommend it) in case we wanted to do a couple of days on the beach instead of going to Legoland. But we ended up going to Legoland each day instead!

2. Legoland is Less Crowded Than Disneyland

Granted, I haven't been to Legoland during the peak season. The closest we came was Valentine's Day/President's Day Weekend, which was definitely more crowded, but still not nearly as bad as Disneyland on the least crowded day I've experienced.

But we have experienced both Legoland and Disneyland the week after Labor Day (different years) giving us a pretty apples-to-apples comparison. And Legoland was definitely much less crowded than Disneyland.

All that adds up to less crowds at Legoland. Oh, yeah! That means shorter lines for rides (granted, the rides at Disneyland are more worth the wait), for food, for photos with characters...and more time for enjoying the park!

I remember walking through Disneyland's Main Street at closing time, barely being able to move in the dense crowd. Ugh. Makes me claustrophobic just thinking about it.

Contrast that with walking through Legoland's Miniland at closing time. It's mostly deserted, and with the sun setting and the lights on in the New York City display, it has its own kind of magic. I always try to take this route while leaving the park, so I can pause while crossing over the Lions Gate Bridge to take in the view of the Statue of Liberty, and just savor the moment.

Maybe it's because I'm an introvert, but I just enjoy a less crowded park more. 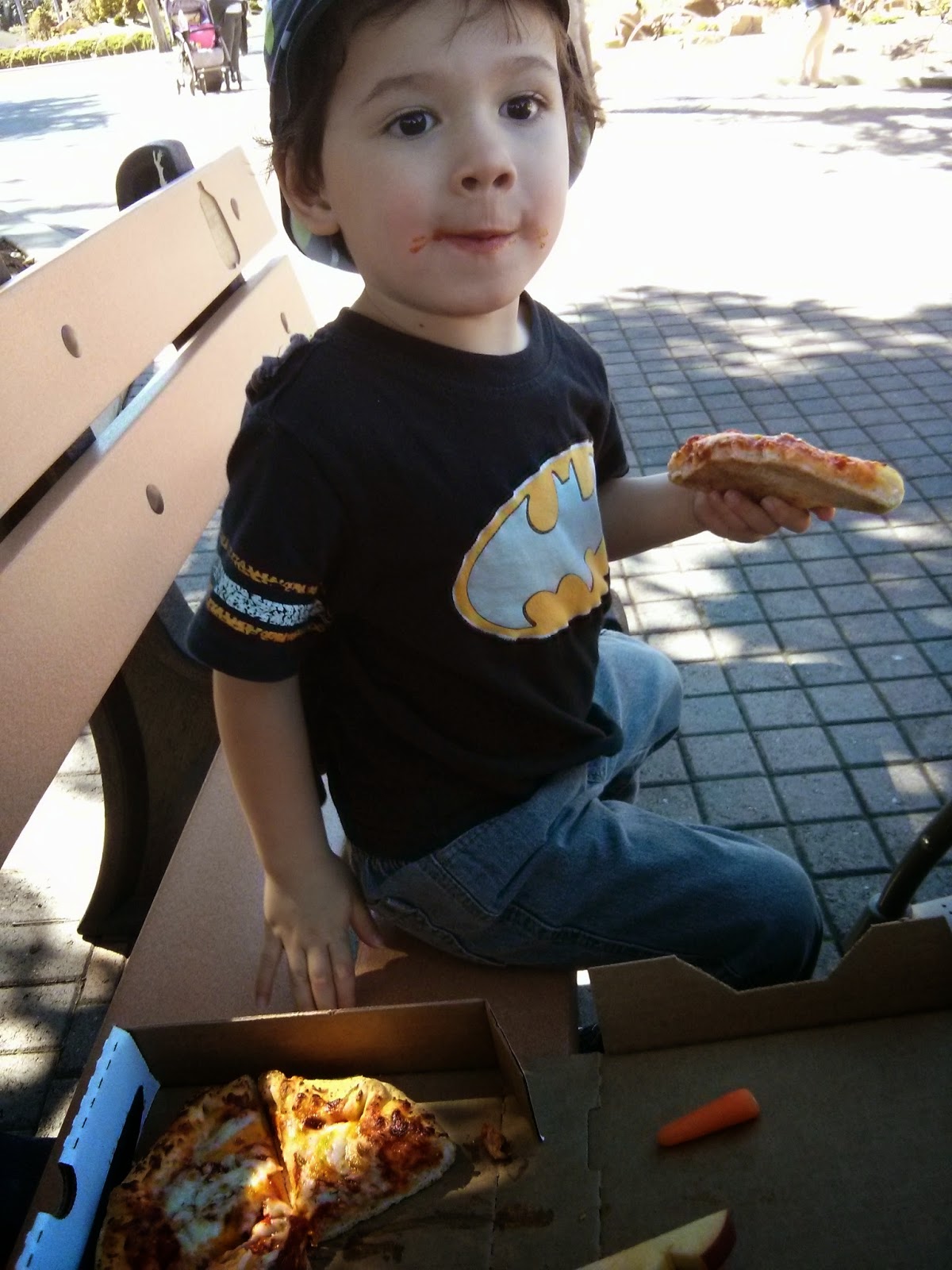 I might be wrong on this one. It could be lack of memory or experience on my part. But I love the food options at Legoland. There are several restaurants throughout the park, each with their own theme, providing many kid-friendly options that are also palatable for adults: pizza, salads and sandwiches, pasta, burgers, hot dogs, Asian, BBQ. Our favorite is Pizza Mania, where our oldest gets a personal pizza for lunch every day. (Oh, well, it's vacation, right?)

There are plenty of quiet, shady spots to eat. Our favorite is the patio behind The Garden. It's a great place to stop for an hour or two to let the baby nap in his stroller while we enjoy our food and the peace and quiet.

Of course the food is a little pricey but members get 20% off which makes it a lot more doable.

Also, while they say coolers and outside food aren't allowed, this is not enforced at all. On our last trip we brought bread, etc., from home, assembled sandwiches in our hotel room, and brought them to the park for the adults to eat, so we only had to buy food for the kids. That made a big difference, and also let me justify splurging on treats like apple fries and churros with chocolate sauce. Yum! 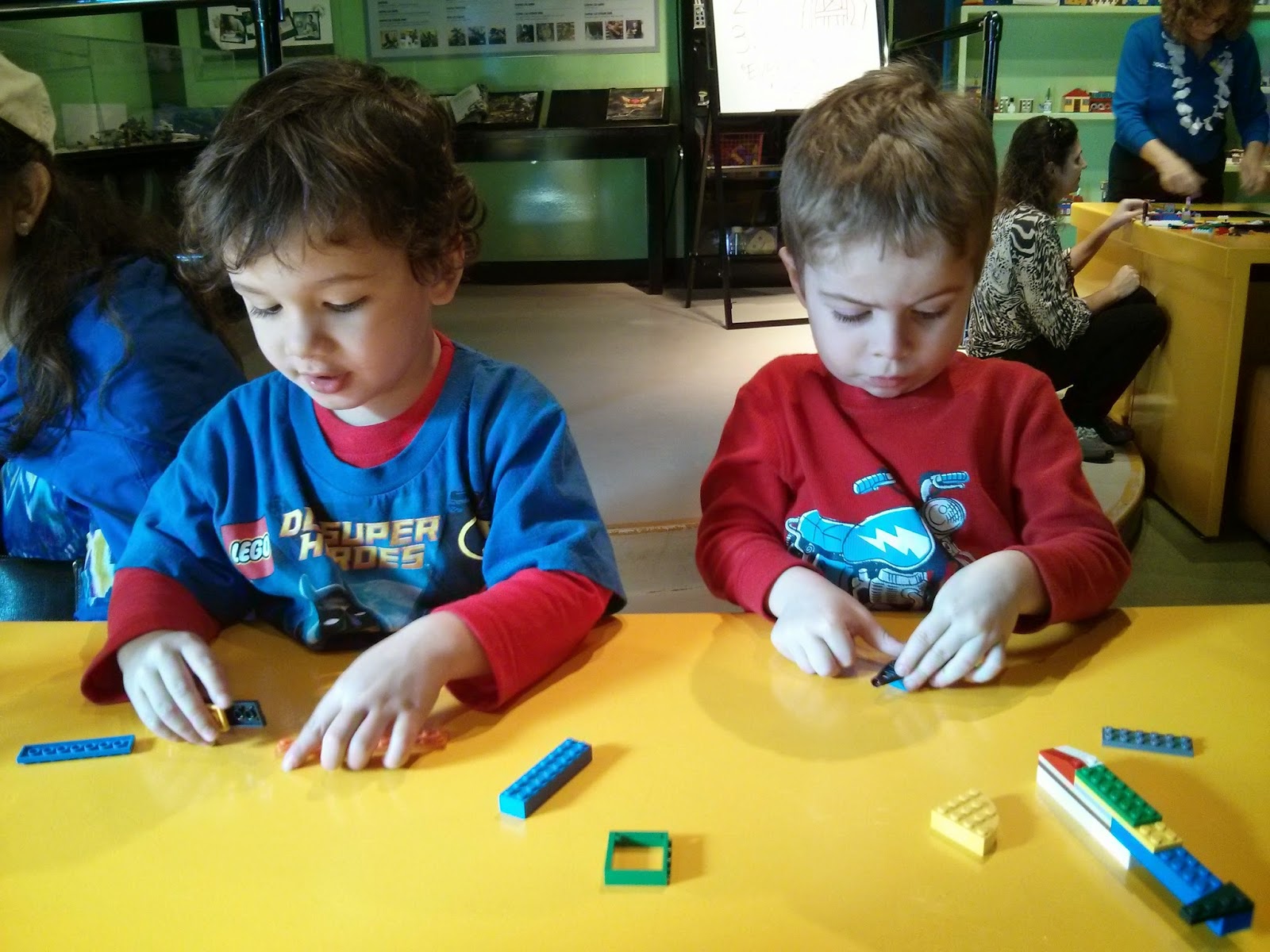 4. Legoland is a Better Place to Play

The last time we went to Legoland, I think we went on a grand total of four rides during our three days at the park. Seriously. My son would rather play in one of the several play areas, his favorite being The Hideaways on Castle Hill, which is a giant three-story tree fort with several slides and climbing areas.

There is also a two-story play area in the Land of Adventure where kids can shoot foam balls through air-powered tubes, and Duplo Playtown, a big play area in Duplo Village that is great for toddlers and preschoolers. 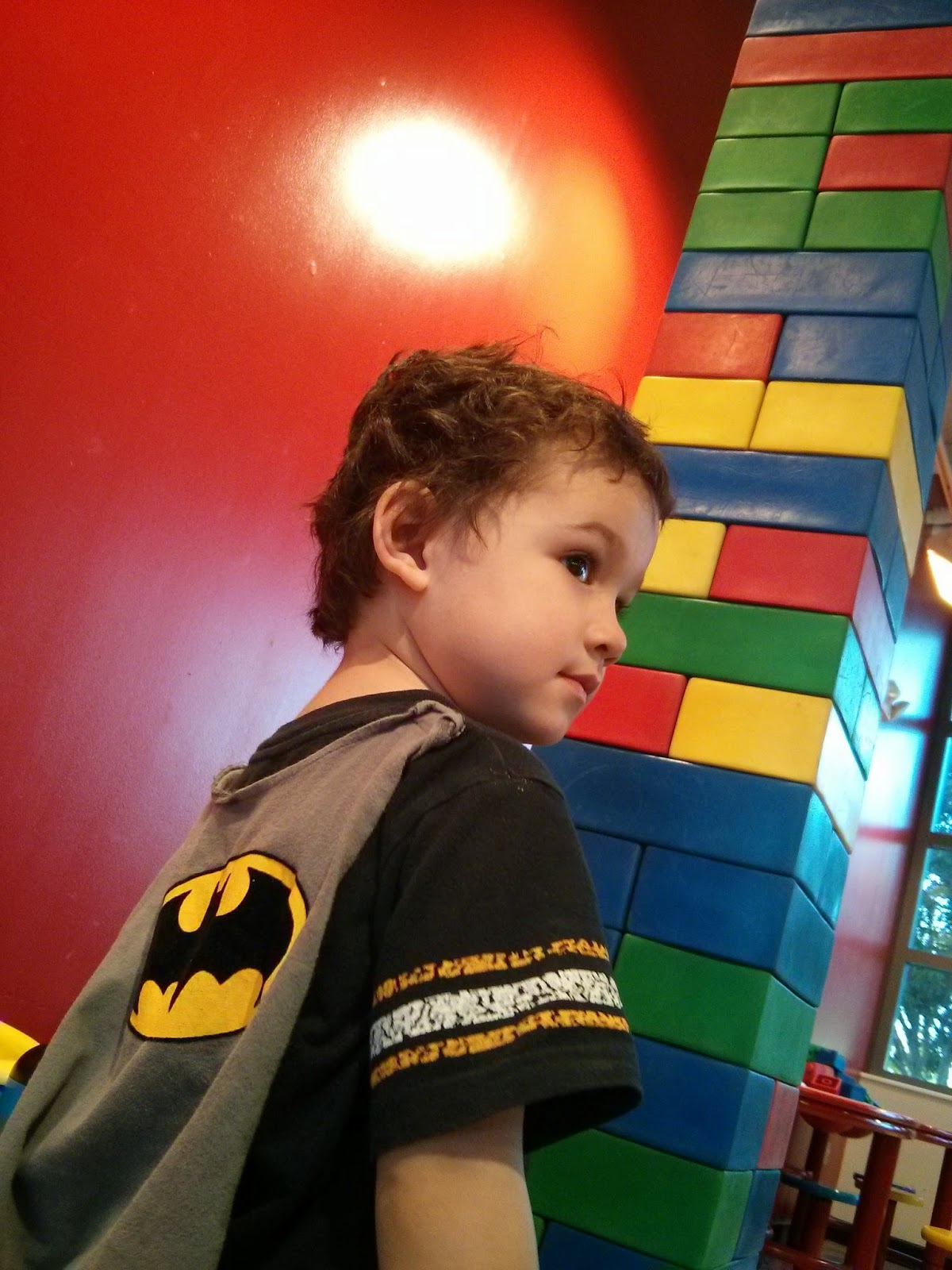 And, of course, everywhere you go there are Legos to build with. I especially love the Lego play areas strategically located in the waiting areas for rides. While parents stand in line, kiddos can build with Legos. Love it!

Sure, we could (and do) play with Legos at home, but there's something about building with Legos at Legoland that sparks my four-year-old's creativity in a special way. Also they have giant foam bricks at Legoland which offer instant gratification as it takes only minutes to assemble a tower taller than a person, or a fort big enough for a little one! So rewarding.

I don't remember any play areas at Disneyland. It's a great place for kids to passively consume entertainment, but at Legoland kids are actively engaged in creating their own "magic."

Which brings me to my last (but not least) point...

5. Legoland is More Educational than Disneyland 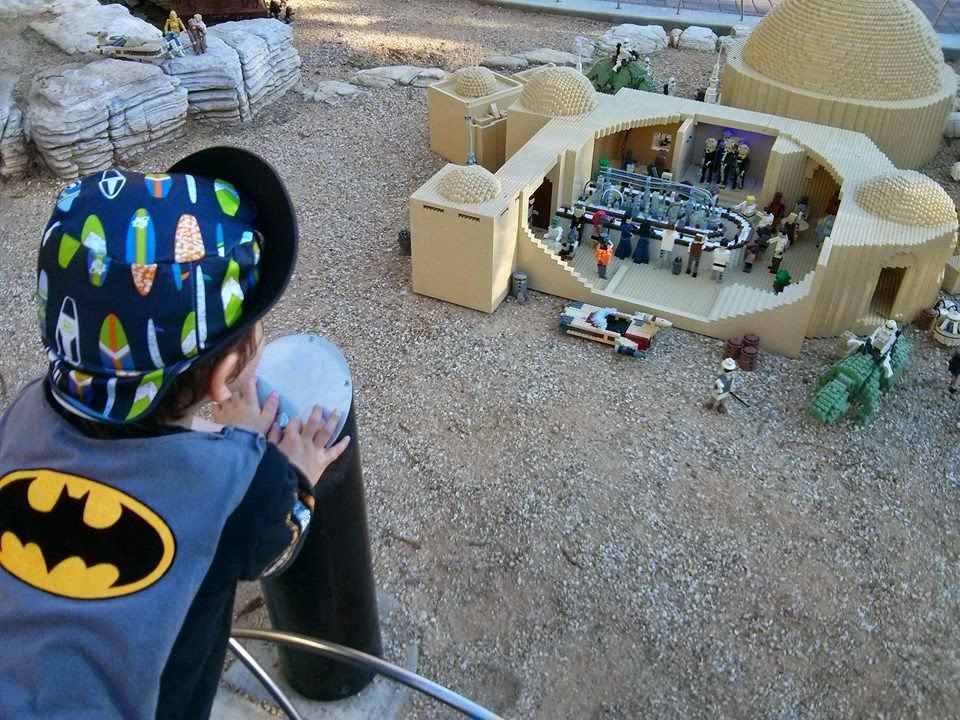 This is something I'm especially sensitive to now that our oldest is in preschool. I'm always looking for teaching opportunities in daily life, and I love that Legoland is full of them. Beyond building with Legos, kids can learn how Legos are made at The Factory, practice driving at Driving School, test their creations at the Build & Test area, explore cause and effect by pushing buttons on the displays in Miniland, dig for fossils in Dino Island, see world landmarks on The Coast Cruise, and learn about fire safety at The Big Test show. There's even a Lego Mindstorms experience for older kids.

Maybe my memory is failing me, but I don't remember anything comparably educational at Disneyland. That's not necessarily a bad thing (everything doesn't have to be educational) but it's just one more thing I appreciate about Legoland.

I'm sure we will find ourselves at Disneyland again in the not-too-distant future. But for now we're getting good use out of our Legoland membership! It may not be "The Happiest Place on Earth" but it's my current happy place!

(And just in case you were wondering, Legoland didn't pay me to write this or anything. But people ask me all the time for my opinion about Legoland since they know we have gone a few times, so I figured I'd put it all in a blog post. :-)
Posted by Heidi Will at 8:33 PM